Motorcycle Helmet Laws Across the U.S.A. 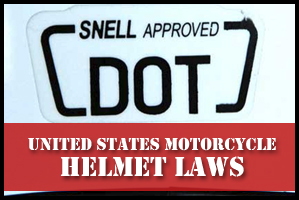 Motorcycle helmet laws are becoming a very heated topic in many states across the U.S.A. Safety advocates are in favor of laws that prohibit riding without a helmet, but many riders feel like it should be their choice, and the law shouldn’t dictate what they wear. Currently, 47 states have some type of helmet law. 19 of them have a universal helmet law, requiring safety helmets for all riders at all times. 28 states out of the 47 with a helmet law are less strict, requiring helmets for specific groups of riders. Only three states do not have any type of helmet law: Illinois, Iowa, and New Hampshire.

In 2003, Pennsylvania enacted a partial helmet law, which states that a rider must be older than 21 with two years of riding experience or have taken an approved motorcycle safety program in order to ride without a a helmet. Since the law was enacted, the percentage of motorcycle deaths and injuries where the rider was helmetless has increased, according to Pennsylvania DOT.

North Carolina’s helmet law states that all motorcyclists must wear a safety helmet at all times. A bill backed by motorcycle-riding Republican John Torbett that called for helmet requirements only for rookie riders and those under 21 fell short in the General Assembly last week. The House Transportation Committee originally endorsed the proposal, but after the Judiciary Committee heard testimony from a dozen emergency-room doctors saying the new law would increase head injuries and deaths, the bill did not have a chance. One of the main arguments presented said the bill, and the accompanying increase in injuries and deaths, would drive up medical costs for hospitals, taxpayers, and families.

Similarly to North Carolina, in the state of Washington, wearing a helmet isn’t a choice – it’s the law! And any old helmet will not suffice – all helmets must be certified as meeting US DOT standards outlined in 49 CFR 571.218.

What are your thoughts on motorcycle helmet laws?